AuthaGraph and Geografia by Marumo Print

Marumo Printing is a long-established firm based in Kagawa, Japan. Founded in 1919, the company continues to print flyers, packaging materials and posters for local companies while embracing a wide range of hi-tech methods such as UV offset, silkscreen, and 3D printing. In 2008, the firm launched a new brand 'geografia'.
'geografia' sectional paper globe products, as its flagship products using unique printing technologies including UV offset and afterglow printing, are available with 15 different types so far.  Sold in museum shops, gift shops and bookstores in some 23 countries, ‘geografia’ products, based on the Earth’s geography and topography, are proving extremely popular the world over. Marumo Printing plans to continue putting energy into producing their own brand products using specialist-printing tech to realize their full potential as an innovative, forward thinking printing company.

What is AuthaGraph and how different from legacy world maps?

Legacy world maps
Every world map that has been invented since the Mercator Projection was first revealed in 1569 can be divided into two groups. One group fits the world into a rectangle by distorting the continents. The Mercator Projection, named after geographer Gerardus Mercator (1512 ~ 1594), is the map of the world generally accepted image through schoolbooks and newspapers today. As Mercator world map is drawn with latitude and meridian lines always crossing orthogonal for the compass navigation purpose, there is a disadvantage that it dramatically distorts the sizes of Antarctica and Greenland.
The other group corrects the excessive distortion or size proportion of the continents. But as they come in a melon shape (i.e. Mollwide projection) or an orange peel shape (i.e. Goode projection), thus they cannot make a seamless rectangular world map and still cannot show the relative positions or distances between points correctly either.
AuthaGraph world map
In 1999, Narukawa created a new map which is rectangular like the Mercator Projection map, and yet correctly projects the continents like the Dymaxion Map (revealed in 1946). Dymaxion projects the globe image accurately on a cuboctahedron or on a icosahedron surface but its 2D development view cannot completely fill a rectangle space like Authagraph does.
AuthaGraph 2D world map process
Narukawa's AuthaGraph utilizes two key geographic factors below to make its globe projection mapping, deformation and developing processes. The more increased the number of surfaces, the closer becomes the regular polyhedron to the spherical shape. The faces of a regular tetrahedron can be developed into a rectangular 2D sheet.
1. Globe surface is divided into 96 oblong tiles.
2. These 96 tiles are projected on an inflated tetrahedron having 24 tiles on each face while maintaining the area ratio of each tile.
3. The inflated tetrahedron is flattened into a regular tetrahedron while keeping the area ratio of each tile.
4. A development diagram obtained by cutting out the regular tetrahedron globe becomes a rectangular world map in a √3:4 aspect ratio.
Using this as a base, a variety of other maps with different themes can be created.
How to use the AuthaGraph world map
There are many applications for this world map using the AuthaGraph projection method. For example, the size and shape of the ozone hole above Antarctica can easily be grasped, and it becomes visually clear why it’s necessary to fly from Tokyo to Brazil via Houston!
As this is a method of projecting a sphere onto a rectangle, its use isn’t limited to depicting coastlines. Taking continental drift for instance, the 600 million year history of continent movements can be expressed with AuthaGraph. India, for example, can be seen breaking away from Madagascar, drifting across the Indian ocean, and colliding with Eurasia to form the Himalayas. Such geological themes can be visually expressed and easily understood.
By its very nature, the spherical world we inhabit has no dead ends. As ancient peoples believed the world existed on an infinite plane, so a sphere and an infinite plane are geometrically very similar. Through tiling or tessellation, Narukawa reproduced an endless world map in 2D as faithfully as possible to the original sphere. Using this as a base, a variety of other maps with different themes can be created.
Taking world history as yet another example, it is possible to plot historical events. During the Age of Discovery beginning in 1475, many adventurers took to the seas. In search of India, Columbus went west and Vasco da Gama east. Using AuthaGraph, the routes they took can be drawn on a single map. It is possible to show how Magellan and Elcano made their circumnavigations, and even how Captain Cook made three trips around the world.
Narukawa’s innovative idea allows us to visualize the world in new ways. 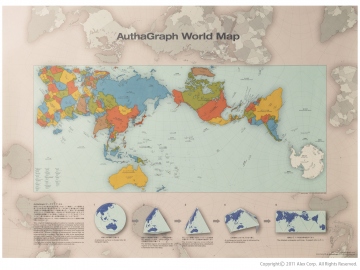 Designed to lean at exactly the angle of the Earth’s tilt (23.4 degrees) when placed on a desk, this series of 3 different sectional paper globes (NIGHT, MATERIAL, and BLANK) showing the Earth’s configuration are available. Night and Material are each created using unique printing inks after-glow and UV screen printing respectively. The product comes as paper parts in a flat package and assembles in about 20 minutes without using scissors or glue. These globes are designed not only as an ‘objet d'art’ but also as an educational toy to learn the Earth's structure when the core and the surface parts are assembled. To hang one from the ceiling, pass a length of string through the gap and simply pin it up! 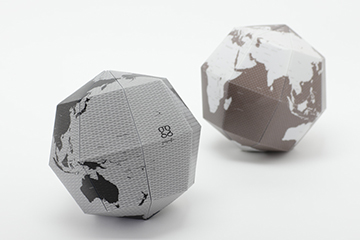 Narukawa, born in 1971, took his first steps on the road to accurately redrawing the map of the world at the Shibaura Institute of Technology (Tokyo) in 1999, where his interest in geometry led to him studying the so-called geodesic dome structures developed by U.S. engineer, designer and inventor Buckminster Fuller (1895-1983).

Founded in the year 2001 by Yusuke Hayashi and Yoko Yasunishi who both studied design in college, DRILL DESIGN is a studio where the pair give total project direction in various fields such as Product, Graphic, and Interior Design. The products they design, which are mainly everyday objects such as furniture, stationery, gardening tools, and kitchen utensils, are available for sale in many countries around the world, including the MoMA Store in New York. They have won numerous awards such as the Good Design Special Award.