"Hita Tenryosui water" is a brand name and is also the company name. Since its launch in 1999, this product has been supported by many people, and many customer testimonials have been received regarding its quality. By cherishing the customer's support and trust, Hita Tenryosui Water Ltd. will strive to sustain the product quality and to offer them to those customers who wish to stay healthy and beautiful. In addition, they aim to be a company that can contribute to the society by dealing with water such as provision of drinking water in the event of disaster like earthquake. Hita Tenryosui Water is an amazing gift from the earth. In the prayer for the peoples' health, not limited in Japan, but throughout the world, they strive to promote Hita Tenryosui water to better serve for as many people as it could. 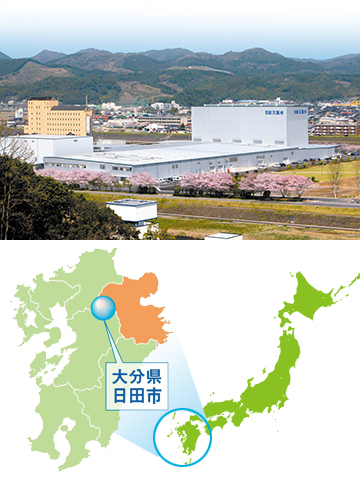 With another name called the natural active hydrogen water, it is the slightly alkaline water supported by those people who are highly conscious about their health. The original quality of raw water is so good that even without sterilisation it passes the criteria of Water Supply Law. It is internationally appreciated for having won both Grand Gold Quality Award of the Monde Selection as well as the Superior Taste Aaward of iTQi. The manufacturing factory has its entire process, from production to shipment, that comply entirely along with those international standards such as the Hazard Analysis and Critical Control Point (HACCP), and ISO 22000:2005 certifications. Hita Tenryosui is the only organization which factory owns the both certifications (as of August, 2011), hence it explains how strictly their product are inspected to be safe.


Hita Tenryosui Water is produced through an automated process all the way from watering sampling through packaging. The production line is equipped with the continuous monitoring device for observing the water temperature, pH, and the total ion volume. So it will catch any subtle abnormality.

* All production lot of Hita Tenryosui Water are tested by almost all employee.


"The product is withdrawn at regular time intervals, and they perform its product standard inspection. Tested in this inspection are not only those test items for the serial monitoring, but also the respective bacterial tests for the product sterlity assurance, and the physical and chemical testing for quality assurance, as well as the tasting test conducted by almost the entire employees."


"Aquaporin" was discovered by an American medical doctor Peter Agre, the 2003 Nobel Prize winner in Chemistry. It is a protein found in one's body which serves as a water channel, which function is known to vary depending on the type of water it lets go through. Also it is said that Aquaporin has influence on activation of Natural Killer Cells.

During the 5th Aquaporins International Conference held in 2007, Hita Tenryosui Water has become an official beverage, and also introduced at the citizens public forum, their research case study on a cell activation. 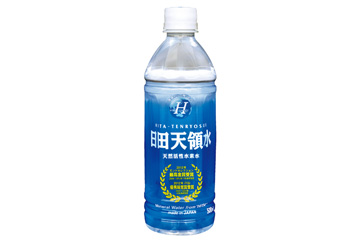 Hometown of "Hita Tenryosui Water" is located in Hita City of Oita Prefecture. It is located almost in the middle of northern parts of Kyushu and is at the basin surrounded by thousand meters high roofs of Kyushu such as Aso and Kuju. It has played a major role in politics, economy and culture of the time, with the recognition of "Tenryo (the imperial dimense)" of the Tokugawa family instituition towards the end of the samurai era.The town which is still reminiscent of it is full of atmosphere.

Gathering rich water becomes river from the surrounding mountains, the water of the pure grace flows into the channel that is everywhere in the town soon, to heal people by carrying the "coolness" in summer whereas the "mist" enhancing the scenery and atmosphere of the town in the winter season.

After running through those waterways, the water returns to Mikumagawa river that runs across the cetntral part of the city from west to east, which will eventually become a part of "Chikugogawa", which is the largest river in Kyushu.Since that period, people in Hita have been proud of water's clearness, and they called the riverside district "Suikyou" rather than Suigou.It is a designated and beloved name that stands for "the pure water of Hita that will never be muddy".

Hita Tenryosui Water is a very precious mineral water that has been naturally nurtured through the several ground layers after thousands and billions of years. We are blessed to offer the Hita Tenryosui Water the heaven's gift to the world, and it is our mission to deliver the product in a safe manner.