Since its establishment in 1932, Ikawa Chokokuten has been engaged in sculpting work for temples and shrines including "Ranma", "Danjiri" and "Gegyo", as well as sculpting of Buddhist altars.
The Horimasa the Third takes quiet pride in inheriting Japanese traditional sculpting techniques. He creates wooden sculptures by using his skills to the fullest extent. Such works cannot be reproduced by machines. All works are made in Japan. Wood is alive, and becomes more beautiful with time as it ages and increases its shine. Horimasa the Third sculpts wood with human warmth to bring you Hina dolls, Yusanbako boxes, nameplates, signs, wooden helmet displays for Boy's Festival, wooden clocks and order-made gifts - truly unique items in the world, created just for you. 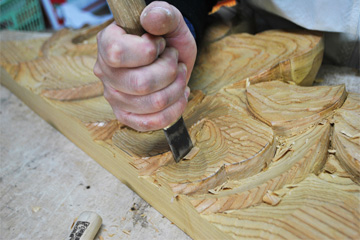 Beautifully sculpted from solid walnut and zelkova. The bird is attached to the base using a magnet, so you can easily separate the bird when using as a shoe horn. Great for decorating the entrance of your home. 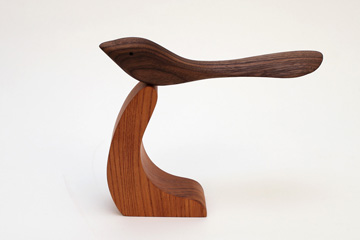 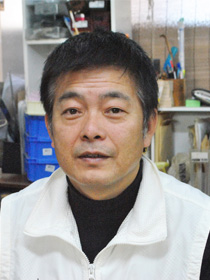 Born in 1961 as the eldest son of Sawakichi the Second of Ikawa Chokokuten (established in 1932).
He aspired to become a sculptor since childhood. At the age of 18, he moved to Kyoto to train under a master sculptor of Kyoto Buddhist altars.
He returned to Tokushima after working in Kyoto for 6 years, and received training from his father to become a sculptor of "Karaki Butsudan" ("rare foreign wood altar") - a traditional local craft.
He currently creates sculptures for temples and shrines, Buddhist altar scuptures, character sculptures, scupted interior goods, etc. as the third generation sculptor of Ikawa Chokokuten. He continues to preserve the traditional sculpting skills handed down across generations, and makes highly artistic and unique works using techniques of Kyoto Buddhist altars and Karaki Butsudan altar sculpting.
Back to Brand List