Few of us would think to question our image of the physical world, the one based on the somewhat flawed Mercator Projection (1569) - or the standard world map.

Hajime Narukawa, however, the Tokyo-based architect-cum-artist has created a new world map which, while employing the same rectangular shape as Mercator's projection, succeeds in showing the world's physical components (continents and seas, etc.) scaled as accurately as possible.

Narukawa, 40, took his first steps on the road to accurately redrawing the map of the world nearly 20 years ago at the Shibaura Institute of Technology in Tokyo, where his interest in geometry led to him studying the so-called geodesic dome structures developed by U.S. engineer, designer and inventor Buckminster Fuller (1895-1983).

Fuller, whose architecture and whose quest for an alternative lifestyle helped inspire the hippie movement of the 1960s, also created an alternative to the conventional Mercator-projection map that he named the Dymaxion map. Featuring jagged edges, this map aimed to solve the fundamental flaw in Mercator's projection: its great distortions of area ratios — distortions that grow worse toward the North and South poles.

This is where Narukawa's map comes in. In fact, prior to creating a his AuthaGraph map, Narukawa, greatly inspired by Fuller, had long studied how he could image our three-dimensional world on a two-dimensional surface with as little distortion as possible. 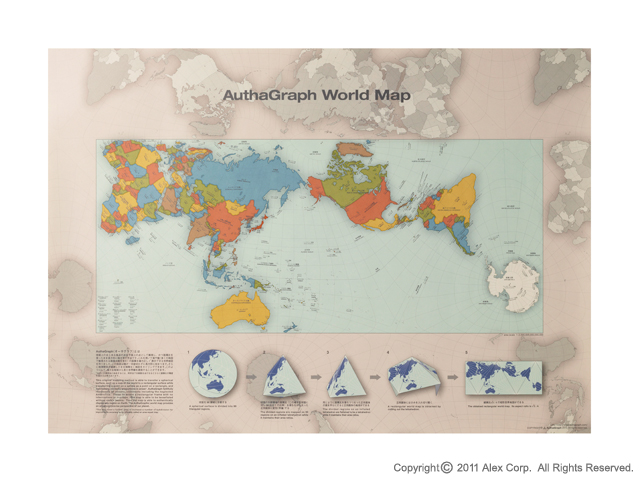 Narukawa's breakthrough finally came in the fall of 1999. While fiddling with the plastic, tetrahedron-shaped wrapping of a plum-flavored candy, he suddenly remembered his childhood experience of toying with a Tetra Pak milk carton after school lunches. He used to breath air into emptied tetrahedral package and then stamp on them. Narukawa was intrigued by them becoming rectangles when flattened.

He eventually divided the spherical surface into 96 regions before turning it into an inflated tetrahedron, and then distorting it again into a regular tetrahedron — which, when it's cut out, makes a rectangle that maintains land ratios and land shapes similar to those in the spherical surface. Using 3-D modeling software, he simulated the distortion process countless times on the way to creating his AuthaGraph map.