Stomu Yamash’ta progressed from being a teenage musical prodigy in the 1960s to arguably the most famous Japanese person on the planet a decade later. Then he gave it all up and went to meditate in a Kyoto monastery for three years. For three decades, the musician that Time magazine once referred to as “the man who has changed the image of percussion” has largely stayed in Kyoto refining his art, refining his life and living in a Zen-like world of sounds and music.

This is not rock ’n’ roll. There’s no record deal, no tour, no merchandise, no groupies. There’s no timeline. Yamash’ta is a point in infinity, a musical shaman, a giver and receiver of life and music. 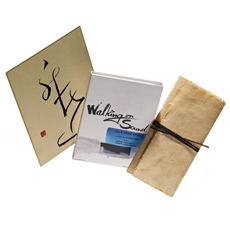 His most recent tangible product is a double DVD, “Walking on Sound,” in which he collaborates with Icelandic counter-tenor Sverrir Gudjonsson and which is referred to as a “Zen and Viking Opera.” The first part is “The Void,” which brings together Yamash’ta’s percussion, Gudjonsson’s singing and vocalising, Syrian soprano Noma, the Irish flute of Dominique Bertrand, the shakuhachi of Genzan Miyoshi and the chanting of four Buddhist monks. The second part is “The Sound of Zen,” largely consisting of Buddhist chants accompanied by Yamash’ta’s percussion, Miyoshi’s shakuhachi and the yokobue of Michiko Akao. Both are live performances recorded at the Saint-Eustache Church in Paris. The other DVD is a documentary of how the performance came together.

At a young age, Yamash’ta’s reputation was established so rapidly that he was in demand the world over from the greatest musicians of his age. His entrée was classical music – he played as a guest with the Kyoto and Osaka Philharmonic Orchestras at the age of 14 – but his musical mind quickly absorbed everything around it, be it jazz, avant garde, rock or something quite abstract. He defined the role of the solo percussionist and started to improvise and compose, contributing to the soundtracks of movies such as “The Tale of Zatoichi,” “The Man Who Fell to Earth” and “The Devils.” He moved through avant garde to jazz before establishing the Red Buddha Theatre Company to showcase his idea of sounds and vision. His most visible work in the rock world came in 1976 when he collaborated on the Go project with huge stars such as Steve Winwood (Traffic), Phil Manzanera (Roxy Music), Mike Shrieve (Santana), Klaus Schulze (Can) and Al Di Meola (Return to Forever). 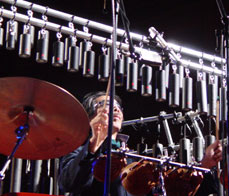 Yamash’ta had transformed himself from a classical teenage prodigy into a global rock star. So he gave it all up, returned to Kyoto and stayed at a monastery for three years. “I came back from Europe when I was at my peak, and many people wondered why I quit and came back to a Buddhist temple, suspending – almost giving up – my career,” Yamash’ta recalls. “I thought I should give up to become zero again, to get hungry again. I had to be honest to myself, what I felt. I was too lucky to be able to taste the best of everything, including classical music, contemporary music, jazz-rock fusion. I was able to collaborate with the best. This was a kind of fate and after tasting this kind of pure fate, I had to go back to something totally different, which you could call “religion,” although I don’t like to use that word because it creates misunderstandings. I was glad because I had this almost desperate hunger which made me go to the temple. My father was associated with one of the most famous temples in Kyoto – Toji – and by this luck I found something that I had never experienced in my lifetime before. So it was a really good approach for me.”

Yamash’ta wanted out of the system.

“When you become part of a system, at some point we need to make a transition to go to a different level,” Yamash’ta explains. “In today’s reality, we are facing this kind of transition.” Zen uses meditation as the means to enlightenment and Yamash’ta took a similar path in the temple, “a spiritual environment of humility and innocence.” Says he, “It gave me enormous joy and some kind of answer. Suddenly, I could see myself very clearly.”

As if by fate, he learned of a stone with amazing sonic properties that was found in the mountains of Kagawa Prefecture on Shikoku Island. “When I met the Sanukite stones, I felt like my life was almost complete,” he says. “Speaking personally, I got my answer to life so I feel I can end it, to depart to a different world. But of course, I am still living here, existing, and the last 25 or 30 years were for me more personal. And this personal thing was wonderful – to be able to spend this time as an artist. I didn’t have to concern myself with social benefit.”

But Yamash’ta doesn’t reject society. Far from it. He is more outgoing than some might think. He may think a lot and meditate a lot, but he laughs a lot and enjoys good company. It’s easy to see that talking, communicating puts a sparkle in his eye. “Now, I feel like maybe I’m at my final stage, so from now it’s more like my mission – or whatever I can do – to communicate, to make some kind of function to create a better beauty, and this beauty can lead to a new ‘garden,’ ” he says. 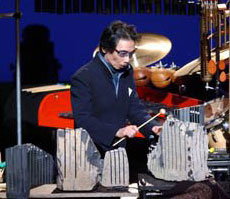 His musical endeavours over the last quarter of a century have revolved around bringing the Sanukite stones to life. Anyone can bang a drum, but breathing life into inanimate objects takes a belief that the objects really do possess life and power. Yamash’ta caresses his stones and communicates with his stones as if they are alive. For him, they are. They possess life – in their unique sounds and their 20-million-year history. Yamash’ta the percussionist is not a member of a band or orchestra; he does not beat time to someone else’s rhythm. He does not beat time. He is a channeler of sounds. He discovers the sounds of the stones. They are not his sounds; they are the stones’ sounds.

“The Void” is a journey through history, through life, and a message of peace and hope for the future. Yamash’ta worries about the younger generation and wishes they could find the awakening that he has experienced over the last three decades. “Compared to our age, young people have a more established education,” he explains. “They have more information, but being young, the tragedy is they have not had enough experiences that could create a new dimension, and to face a new consciousness; you need knowledge to overcome. You have to filter knowledge through experience. And maybe this is one reason why young people are becoming so inward-looking today.

“I was glad about Steve Jobs’ message: Stay hungry, stay foolish. That is very zen. To understand foolishness is a very, very deep message. I think in the ’60s and ’70s we had a very good kind of foolishness and this opened a new door, a desire to taste humanity. When you hear some of today’s songs, it’s so obvious they have not had good experience. I’m sorry to say they are just singing social information. If they allowed themselves to be more ‘foolish,’ they could find a better approach to create a new artistic scene with coexistence.”

Yamash’ta is no fool, but he has the spirit of a fool – the fool of Shakespearean literature, a fool that has more wisdom than those around him, but which is not always obvious. As in meditation, sometimes you have to close your eyes to see.