Drinking hot espresso in the forest. Making relaxing tea on a mountaintop. The Nodate Mug from Sekibi Kodo (bPrize) is just the item to enrich your relaxing time outdoors. This “Hon-Urushi” lacquered mug is made by using the traditional Aizu lacquering technique. The mug’s light weight and durability are perfect for outdoor use. It is especially valuable in environments with a large difference in temperatures, such as mountain climbing.
“A lacquered container is naturally waterproof and has anti-bacterial qualities. It also excels in heat retention and insulation. You can hold it even if you pour hot liquids into it, and your lips won’t freeze on the cup when you drink in extreme cold on a mountaintop. It’s made of wood and is eco-friendly. It’s inherently suited for outdoor use,” says Mr. Masakuni Seki, the representative of Sekibi Kodo and designer of the mug.
The leather belt for hanging the mug from your backpack is made of water-resistant elk hide. It is attached to the mug so that the edge faces downward to allow it to dry easily. Such detail-oriented design is what makes this mug so popular among many outdoor aficionados. 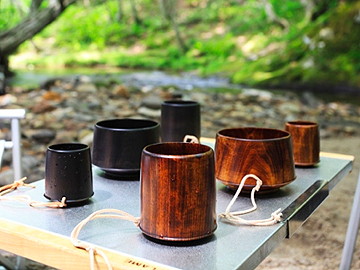 Robust Beauty Made from Aizu Craftsmanship

The functional beauty that allows long-lasting outdoor use is created from the skills of Aizu craftsmen. Japanese horse chestnut is cut vertically along the trunk of the wood, then slowly carved and processed to make the most use of the patterns on the surface.
“Wood craftsmen use the expression ‘to let the wood go wild,’ which refers to carved solid wood that tries to move as it becomes wet. The craftsman carves the wood, then waits for its movement to become calm. By repeating this process, the wood becomes hard and resistant to warping.”
After the form has been established, a master lacquer painter meticulously applies lacquer using a technique called “Fuki Urushi” (lacquer wiping) that brings out the best of the wooden surface. This finish creates a deep color that reminds one of an ancient forest.
The best part of Hon-Urushi lacquer is its gloss that shines with use. You can enjoy the gradual change of the mug as it slowly becomes comfortable to the touch, becoming truly your own unique cup. Even if your favorite mug becomes damaged or cracked, you can keep on using it forever by fixing it with the traditional “Kintsugi” technique where the crack is filled with resin, then finished with gold powder and lacquer. 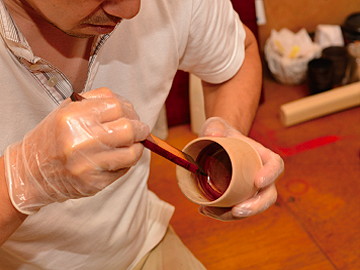 The Nodate Mug overturns the fixed image that lacquered containers should be used on limited occasions such as to entertain important guests. Seki-san says that this mug could only be invented in Aizu.
“Aizu lacquerware had originally been intended for daily use. Throughout history, the people of Aizu faced difficulties as their lord had changed many times. However, they created a culture of craftsmanship by incorporating various techniques such as lacquer painting and woodwork in order to continue to create lacquerware suited for life in Japan. This local strength and toughness is inherited by this mug.”
The beauty of this mug that combines function with form has been recognized by the world of Japanese tea. The “Nodate Mug One” was awarded the “Modern Sa-Do Award 2013 Special ‘Ask Rikyu’ Prize.”
Based in the Aizu region, Sekibi Kodo continues to spread the ancient and new Nodate style that lets you enjoy Urushi lacquer in a relaxed manner. 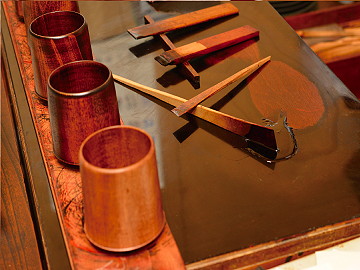 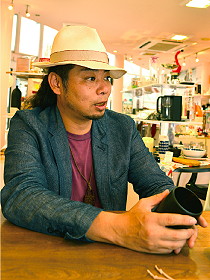 Born in Aizu Wakamatsu City in 1967. After working at the National Space Development Agency of Japan, Mr. Seki joined Sekibi Kodo in 2003 and became president in 2007. He was involved in the creation of the Aizu lacquer brand “BITOWA” and continues to produce various products.
>> Know more about the creator Masakuni Seki

Turugajo Castle (Wakamatsu Castle) is located in Aizu Wakamatsu City. It was built in the latter half of the 16th century by Gamo Ujisato who is well-known for promoting the development of Aizu lacquerware. The castle withstood fierce attacks from the Western Army in the Boshin War. Now, the area is surrounded by beautiful foliage and maintains a calm atmosphere. The castle is famous for its stone walls and unique tower that uses red roof tiles. From the observation deck you can get a great view of central Aizu Wakamatsu City as well as Mt. Bandai and Mt. Iimori.
You can see how medieval samurai lived at the Aizu Buke Yashiki (Aizu samurai house), located east of Tsurugajo Castle. It is an open-air museum centered around the former residence of Saigo Tanomo, a chief retainer of Aizu domain at the end of the Edo period. In addition to the large residence, there is a tea-ceremony house, a rice mill, and a history museum on the premises to let you experience medieval Japan.

The appeal of Aizu isn’t just its castle town. Aizu is also rich in nature. The grand scenery created by Lake Inawashiro and Mt. Bandai, which changes colors according to the time of day, is magnificent.
Mt. Bandai is an active volcano that consists of Omote-Bandai which is has a smooth slope and is also called Aizu Fuji, and Ura-Bandai which has a rough surface created by volcanic activity. You can enjoy taking a tour of these different landscapes.

Ouchijuku, a post station of the Edo period, is located in the mountains south of central Aizu Wakamatsu. The town prospered by serving travelers along Aizu Nishi Kaido road that connects Aizu and Nikko. It is known for its thatched roof buildings which are lined along the road. The area has been designated by the Japanese government as an Important Preservation District for Groups of Traditional Buildings, and continues to attract sightseers who want to get a taste of ancient Japan.

When visiting Aizu, you should try out a local traditional dish called Kozuyu. It is a soup made with dried scallop stock and seasoned with salt and soy sauce. It contains Satoimo potatoes, carrots, various mushrooms, konjac, and tiny balls of wheat gluten called Mamefu. It is always served on celebratory occasions in the region. The colors of the ingredients and beautiful Aizu lacquered bowl will surely stimulate your appetite.