In 2001 Hitoshi Ichibashi established Hacoa*, an original brand that combines many aspects of Kazuo Kawasaki’s design philosophy with the traditional woodworking tech of Yamaguchi Kougei to create superb items of natural timber.

Hacoa’s earliest products were cell phone accessories. The turning point of the company’s fortunes came when it began creating the Wooden Keyboard, originally as a non-allergenic alternative for people with an allergic reaction to plastic. The keyboard was a huge hit and launched the Hacoa brand into the spotlight both domestically and internationally. Not completely comfortable relying on the continued success of a single product, the company continued to innovate and came up with a range of superb computer peripherals.

However, the 2008 meltdown of the world economy brought on by the collapse of Lehman Brothers caused Hacoa’s sales to shrink considerably. In some ways this worked to the company’s advantage as it allowed the artisans time to work on developing new products. Ichihashi places great emphasis on the ‘wow factor’ of Hacoa products and now offers a wide range of items beyond computer peripherals, each of which is beautifully engineered, easy to use, and a joy to own.

*The 'Hacoa' brand name is a combination ’Haco’ meaning ‘box’ and the well known connotation of ‘A’ as ‘first class’. 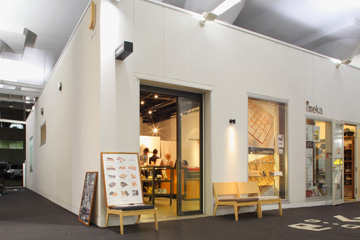 The Ki-Board* is a refreshingly creative twist on the otherwise mundane world of plastic mass production. Created entirely of carefully selected hardwoods of the highest quality, each keyboard is lovingly fashioned by a Japanese master craftsman in a labor-intensive process at the rate of just one per day!

Offered in a choice of either maple or walnut, the Ki-Board is roughly the same size as a standard keyboard, weighing in at 670 and 650 grams respectively. It uses a USB interface compatible with standard PCs, and comes with a trio of LED lights to display the Scroll Lock, Caps Lock, and Number Lock status. The lettering of the keycaps is laser-engraved to not wear off. The 89 keys are cut out from a single panel of wood, fashioned and returned to the same position so that the completed Ki-Board's grain pattern flows naturally. Run your fingers over the rich, warm finish of the natural hardwood - who doesn't like the feel of fine wood at their fingertips? Combining nature, creativity and precision engineering, the Ki-Board is simply outstanding in both form and feel. Clean lines, fabulous natural texture and a great clickity-clack sound provide a satisfying, truly unique and luxurious typing experience. Regardless of your office or home environment, the Ki-Board is a slab of nature that brings to mind the beautiful outdoors. (No need to worry about deforestation as the lumber comes from responsibly managed forests). Created from a renewable, sustainable and recyclable resource, the Ki-Board evokes a sense of peace and tranquility.

Hacoa's Ki-Board is a great gift for the office worker in your life. Perhaps a congratulatory present for someone starting out at a new job, or maybe a gift for someone who has reached an important career milestone. Whatever the occasion, there is something in the Hacoa range to suit every computer user.
*'Ki' is both 'wood' and 'tree' in Japanese. 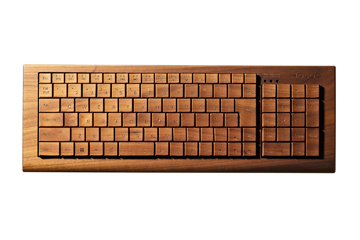 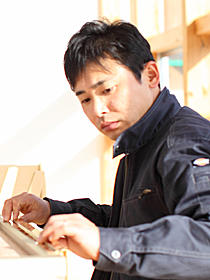 Following Hitoshi Ichibashi’s marriage, the founder and president of Yamaguchi Kougei suggested that his new son-in-law join the family business. (At the time Ichihashi was working as an engineer at a company that produced molded plastic trays and boxes.)

Yamaguchi Kougei, established in 1962, uses traditional tech to create the core wooden boxes of Echizen urushi lacquerware. Several highly skilled artisans share the multi-stage process of creating this historic lacquerware; box-shape creators; round/oval-shape creators; and those who prepare and apply the layers of urushi lacquer. Each field of expertise demands a long apprenticeship and many years of diligent practice before the title of ‘master’ is bestowed.

Ichihashi studied, practiced and absorbed all aspects of the company including the technical side of woodworking. He learned to understand and appreciate the attraction and potential of natural timber, and realized that the traditional techniques of the artisans need to be nurtured and passed onto the next generation.

Yamaguchi Kougei do not make finished items. Soon after beginning his apprenticeship Ichihashi began to think in terms of creating an original brand using the company’s tech to produce high-quality finished timber items - inspiration to realization. He gave himself a three-year timeframe, but was rebuffed by his father-in-law on the grounds that ‘it takes a minimum of ten years to become an accomplished craftsman’.

At age 27, Ichihashi attended a course run by Kazuo Kawasaki, a nationally known designer born in Fukui Prefecture, to study the intricacies of the design world. He learned that design is fundamentally a tool for expressing and communicating concepts and ideas.
Sticking with his three-year plan by managing his time very carefully, in 2001 Ichihashi established Hacoa.
Back to Brand List