Sharpness Leads to Gentleness to Your Nails

To select a high quality nail clipper shows that you truly care about your nails. You can feel it every time you use the nail nippers made by SUWADA (Suwada Blacksmith Works, Inc.).


Creating nippers for cutting your nails - a very delicate part of your body - requires delicate and precise skills from design to production.


SUWADA has been refining the “sharpness” of its nail nippers since its founding in 1926. The tools have a comfortable sharpness and do not put extra pressure on your nails. The curved tip fits the curve of your nails to produce a smooth cut. You can easily cut ingrown and deformed nails.


The high quality that meets the needs of professional nail artists and medical professionals have become popular among people who truly care about their nails and the number of fans of these finely crafted Japanese products has been increasing. 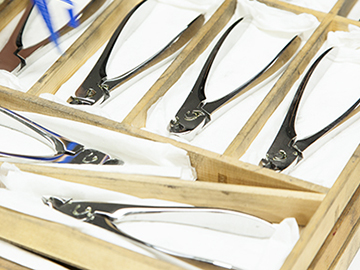 Putting Our Heart and Soul into Creating the “Ultimate Pair”

A feature of SUWADA nail nippers is its beautiful form created by the blades and handles. The mirror-finished product uses 50 different processes to create its exquisite form.


High-grade stainless steel used in custom knives is forged by the high heat of more than 1,000 degrees Celcius and pressures of more than 400 tons. Then, only the best-hammered materials are selected for processing. Craftsmen meticulously polish the material, changing the abrasive many times.


The sharpness that defines SUWADA nippers are created by its two blades. They are sharpened by the skills of master craftsmen, draw a beautiful curve and close without the slightest gap.


“I hope that people who have tried out tens of nail clippers as well as those who are trying out their first pair can think that our nail nippers are the best. We make our nippers with such a thought,” says the company’s president, Mr. Tomoyuki Kobayashi, who is also responsible for product development.


The company provides maintenance services such as sharpening and repairs so that your nippers will always keep their sharpness. 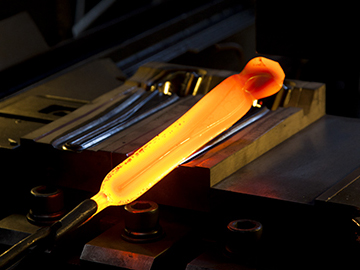 Essence of Creation Viewed in an Open Factory

SUWADA is located in Sanjo City, Niigata Prefecture. Sanjo has a history of more than 400 years as a city of smithery. Mr. Kobayashi says that metal forging techniques have been successfully inherited due to the nature of the citizens of the city.


“In the winter, our work begins with plowing the snow. People living in this area with heavy snowfall have good patience. We are naturally suited for work which requires endurance.”


SUWADA’s factory, surrounded by forests, has 35 craftsmen performing all processes by hand from forging to finish. To let people see that their work is free of fakery or compromise, the company started the SUWADA OPEN FACTORY in 2011 where you can freely tour the factory.


Visitors can use tablet devices to get an up-close view of the craftsmen’s hands as they work. Customers travel great distances to visit this factory which lets you experience the essence of SUWADA’s creative spirit. 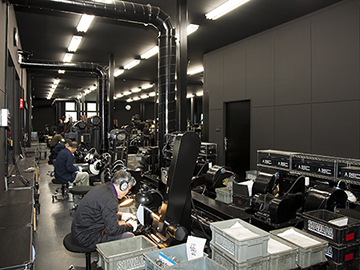 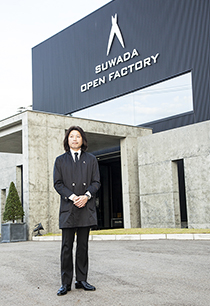 Mr. Kobayashi was born in Sanjo City, Niigata Prefecture in 1963. He joined his family business, Suwada Blacksmith Works, Inc. in 1991. He became the first graduate of the manager development course at the SME University Sanjo Campus and started improving the environment around and within the production facilities and the labor environment. His products have won numerous Good Design Awards for highly functional designs. Mr. Kobayashi became president of the company after his father in 1997. He implemented the industry’s first full performance-based pay system. He has created the SUWADA brand and pioneered the upscale nail clipper market. The company was selected as one of the “Japan’s 300 Most Vibrant SMEs in Manufacturing” by the Small and Medium Enterprise (SME) Agency of the Ministry of Economy, Trade and Industry in 2007. The company’s new nail nipper was awarded the Good Design Award for Small and Medium Enterprises and the company was selected as an “Excellent Design Company.” The company has participated in Germany’s Frankfurter Messe, one of the world’s foremost consumer goods showcases, every year since 1994, and continues to gain worldwide acclaim.
>> Know more about Tomoyuki Kobayashi

Called Echigo in ancient times, Niigata Prefecture has supported traditional Japanese cuisine as one of the main producers of rice. The area is also known for production of metal products. Smithery, now popular in the central Niigata cities of Sanjo and Tsubame, has its origins in Japanese nail making undertaken by farmers in the off-season in the Edo Period. Various metal products including knives and tableware are produced in this region in the present day.

It takes about one hour by high-speed boat to reach Sadogashima Island from mainland Japan. Sadogashima is a large island and popular sightseeing destination in Niigata Prefecture. Beautiful, old rural scenery remains on this island where initiatives to cohabitate with endangered Toki birds are being undertaken.


A famous historical site on this island is the Sado Kinzan (Sado Gold Mountain). Vast amounts of gold and silver were mined from this mountain to be used as a source of money by the Edo Shogunate. You can take tours to visit reproductions of mining sites. In recent years, initiatives to preserve buildings from the mining days and the surrounding area have been undertaken, and the historical area around the Sado mine is now listed as a candidate UNESCO World Heritage Site.

Yahiko Shrine, located to the northwest of Sanjo City, is surrounded by the deep forests of Mt. Yahiko. It is an ancient shrine which is described in the famous compilation of poems, the Manyoshu. The god Amano-Kaguyama-no-Mikoto, the deity of development of the Echigo area, is worshipped here. The shrine is popular as a “power spot” that is believed to bring romance.


In the surrounding area is the Rokuen Garden that has cute deer that comes near visitors, and Yahiko Park where you can enjoy the scenery that changes from season to season. The area is always busy with visitors who enjoy taking a walk.

Bandai Bridge, located near the mouth of Shinano River, has a beautiful set of six arches that span across the river surface. The bridge, made of reinforced concrete that was rare in those times, was completed in 1926. It has been designated as Japan’s Important Cultural Property, the second such designation given to a bridge on a national road after Nihonbashi Bridge.


This bridge has granite side panels which not only give it a modern look but also provide added strength that allowed it to survive the great Niigata Earthquake. It has become a symbol of Niigata City along with the restored pre-war streetlights.

The popular local food in this city of smithery is Tsubame Ramen noodles. It was invented to satisfy the appetites of the craftsmen that worked in the local workshops. It features thick, salty noodles that don’t get soft easily. The hearty soup contains pork back fat and does not get cold easily, a feature of soups seen in area that get heavy snow. Each noodle shop has its own recipe such as fish-based or pork-based soup. Why not try out and enjoy the different flavors provided by the shops?